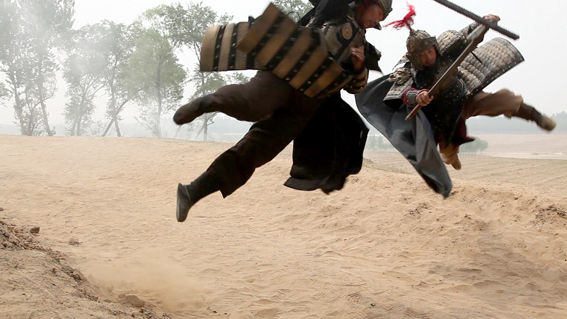 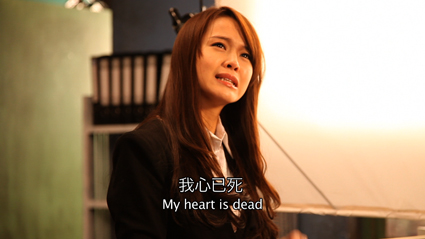 It opens with a traditional Chinese sword fight. Two men in armor carefully exchange choreographed blows while twirling elaborately through the air. Upon closer inspection, the chords with which their bodies are lifted into the air become visible.

The illusionary character of this martial arts scene is, in general, more than transparent. The camera wanders back and forth between the intently acting players and those who watch them or record the game on camera. Ella Raidel’s video Play Life Serie exposes its own methods right from the start. We see film shoots and film sites where Chinese soap operas are produced. As the camera pans to film teams and cameramen, the fictional content of the rehearsed scenes is interrupted and revealed as the process of making-of. At the same time, through editing, Raidel replays particular movements, handholds, and gestures of the characters, thus intensifying their serial level. The repetitions make clear the extent to which sword fights, wine, love, and revolt are part of a medially represented repertoire of gestures. In the chapter Play Life Cry, a young woman applying for a job at a firm called the Anti-Fake-Factory cries at the interview. As proof of her qualification, she holds up in the air certificates in the form of red books. The books vaguely recall the Mao bible, the signal color red—which is generously represented in the coloring of the mise-en-scène—refers to the color of socialism, but also to blossoming love and melodrama. The next chapter, Play Life Love, is illustrated by a pop singer’s performance and his schmaltzy love songs with a video clip in which a young woman hurries broken-hearted through the streets. Both episodes are offensively concerned with the soap opera’s very own mechanisms: making private feelings public and public spaces private. This process often brings de-politicization along with it, but not in Raidel’s work: the observing camera continually moves into the picture as a documentary agent, intruding into intimate scenes with an observing, correcting gaze. In the concluding episode, in which a recalcitrant employee leaves the office fuming after an argument, the motif of the observing eye repeats. In the midst of anonymous urban architecture and its countless, blank windows, an advertising clip of a staring panda bear appears on an outer façade.
Ella Raidel’s work deals ironically with the Chinese soap opera as fake-factory of collective desires, which in the interplay of fiction and making-of, forces its way through reality, scrutinizing it—as site of image making and image controlling.
(Alexandra Seibel/ Translation: Lisa Rosenblatt) 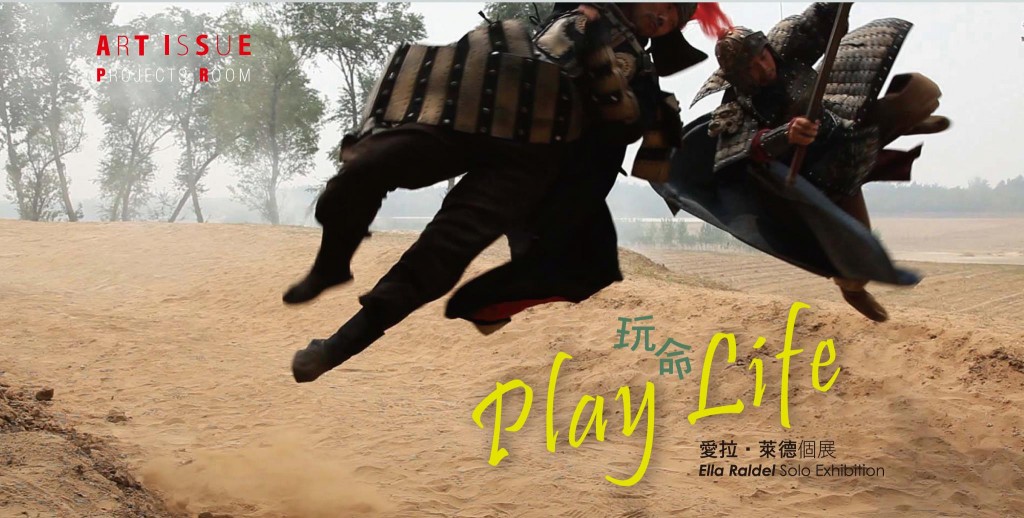